Here is a review on the Shed Poets by Dilys Wood in Artemist Poetry, Issue 9, November 2012

HAVE A SHED - WILL SHARE
Not a store for the lawnmower but a garden room overlooking Killiney Bay, County Dublin: here six women poets (Carol Boland, Marguerite Colgan, Bernie Kenny, Maureen Perkins, Judy Russell, Rosy Wilson) have regular meetings. In her poem, Poets’ Shed, Bernie Kenny refers to “the only sound pens writing” and to a postcard pinned on the wall showing “the Dylan Thomas writing shed in creative disarray”. This lively Irish ‘co-operative’ have been highly productive — anthologies, individual collections and a DVD (The Poets’Shed) with a booklet of poems. In the DVD, beautiful images of landscape and people relate to poems read by the six poets; music is by Elizabeth Purnell.

Bernie Kenny and Rosy Wilson had books published in 2011 and 2012 respectively, and Maureen Perkins has a new collection due out in 2013. Kenny’s Always Dalkey, Always the Sea includes poems which compare with those of the much-admired US poet, Mary Oliver, in their spirit of open invitation to walk out with the poet, “Soon after dawn, today decides / to be delightful. I’m out early // ears awake / eyes finding miracles” (Summer Solstice at Liscannor). Like Oliver, Kenny has found a way to be movingly confessional but also classically constrained, obviously taking much care with choice of words, line-breaks and the shape of the poems. In Rosy Wilson’s Keeper of the Creek there are also superbly economical poems with very pure diction, for example Butterflies, “are scarce this summer// but on my mourning walk / between the hills // I see some flutter / singly and in pairs // among long
grasses / low gorse, purple heather.” Though writing about grief, she has mastered the art of not writing too circumstantially, cutting straight to the heart of loss with the daring conceit ‘mourning’ where we expect ‘morning’.

Posted by Shed Poets at 3:23 AM No comments:

Rosy's Next Book - Keeper of the Creek

Congrats to Rosy for a publishing deal with Lapwing (Belfast).
Here is a preview of her cover. Pic by her son, Paul 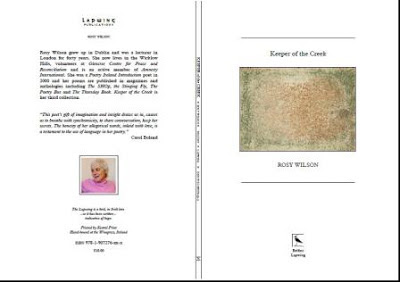 Labels: Keeper of the Creek 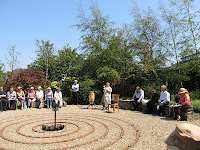 The Shed Poets read in the Cosmic Gardens in Wicklow Town, as part of the Wicklow Arts Festival 2012. Wonderful weather with poets from Dublin, Gorey, Wicklow, Bray and Greystones taking part.
Posted by Shed Poets at 3:51 PM No comments:

The Shed Poets,  Bernie, Marguerite and Carol read at the Dalkey Book Festival on 16th June 2012 at 11am in The Club. It was a great reading with over 30 people coming to hear them - despite competition from the main events.
Congrats to the group for their wonderful poems.
Posted by Shed Poets at 3:42 PM No comments:

Rosy Wilson was recently interviewed on the Arts Programme, Rhyme and Reason on Dublin South fm radio. You can hear her interview and choice of music with Helen Dwyer here
Posted by Shed Poets at 4:03 PM No comments:

The Poets' Shed - a taster

We are delighted to show poems from our latest DVD - one by each of us.

If you want to purchase the DVD at €10 including a booklet of the poems, then email us. No post or packaging costs!
Posted by Shed Poets at 8:55 AM No comments: 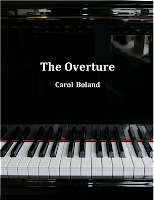 Posted by Shed Poets at 2:40 AM No comments:

You are invited to the launch
‘Always Dalkey, Always the Sea’
by Bernie Kenny
Saturday 25 February ’12
3.30pm
The Magpie Inn, Dalkey.
Guest speaker: Yvonne Cullen
Posted by Shed Poets at 3:47 AM No comments:

Read a review of Shed Poets' performance at the Bray Arts in Nov 2011
by clicking here
Posted by Shed Poets at 8:22 AM No comments: